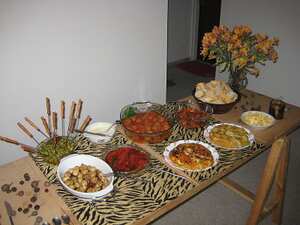 A selection of tapas 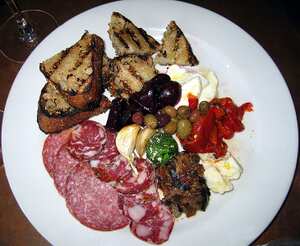 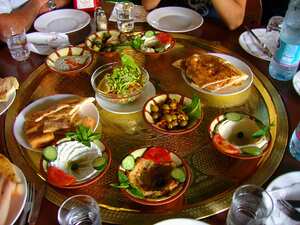 Tapas are little dishes from Spain which are normally served with a drink and can vary from a simple bowl of olives to more complex dishes such as stuffed mussels. In some parts of northern Spain, they are known as pincho or pintxos in Basque. They are not served as a first course and are really something to tide you over between lunch and dinner. However, it is quite common to do a tapas run which is a bit like a pub crawl with food thrown in. Nowadays, most establishments charge for tapas, but if you hunt around, there are many that include them in the price of your drink. Look for bars rather than restaurants - you will always be charged in the latter - and the practice can vary greatly from area to area. In Granada, for example, free tapas are very common, whereas in Sevilla and Barcelona you almost always have to pay separately. Mezze (or meze) are a selection of small dishes, either served alone, as an appetiser or first course. They are are very common in Greece, Cyprus, the Balkans, Turkey, the Middle East and North Africa. A selection of mezze are also served to make up a main meal and popular mezze include baba ghanoush, tabbouleh, falafel, and böreks. Antipasti are served at the table and signifies the official beginning of the Italian meal, or first course. Unlike tapas and mezze, they are rarely served alone. Traditional antipasti include cured meats, olives, roasted garlic, peperoncini, mushrooms, anchovies, artichoke hearts, various cheeses, and peperone (marinated small green peppers, not to be confused with peperoncini).

Although the three categories traditionally serve different purposes, they are grouped together here to give you some ideas for a buffet lunch or dinner. Many of the the recipes can be made or partially made with very little last-minute preparation, giving you time to be with your friends and family rather than slaving over a hot oven. You could also include some of our salads from various parts of the world.