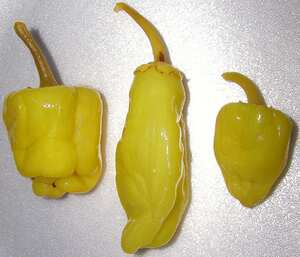 Pepperoncini are a variety of the species Capsicum annuum, like bell peppers and chili peppers. They are also known as Tuscan peppers, sweet Italian peppers and golden Greek peppers. While called pepperoncini in American English, in Italy these particular kind of peppers are called friggitello (plural friggitelli) or more generally peperone (plural peperoni) like other sweet varieties of peppers, while the term peperoncini (singular peperoncino) is used for hotter varieties of chili peppers. Pepperoncini should not be confused with pepperoni, the English name for a typical Italian spicy salami. The Greek varieties are sweeter and less bitter than the Italian varieties grown in Tuscany. Pepperoncini are mild with a slight heat to them, with a hint of bitterness and are commonly pickled and sold packaged in jars.