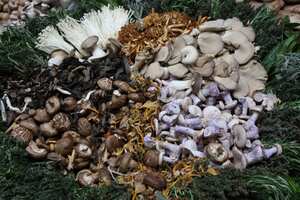 A selection of mushrooms at Borough Market

Edible mushrooms are used extensively in cooking, in many cuisines (notably Chinese, European, and Japanese). Though mushrooms are commonly thought to have little nutritional value, many species are high in fibre and provide vitamins such as thiamine, riboflavin, niacin, biotin, cobalamins, ascorbic acid. Most mushrooms that are sold in supermarkets have been commercially grown on mushroom farms. The most popular of these, Agaricus bisporus, is safe for most people to eat because it is grown in controlled, sterilised environments, though some individuals do not tolerate it well. Several varieties of A. bisporus are grown commercially, including whites, Crimini mushrooms and Portobello. Other cultivated species now available at many grocers include shiitake, maitake or hen-of-the-woods, oyster mushrooms, and enoki.

There are a number of species of mushroom that are poisonous, and although some resemble certain edible species, eating them could be fatal. Eating mushrooms gathered in the wild is risky and should not be undertaken by individuals not knowledgeable in mushroom identification, unless the individuals limit themselves to a relatively small number of good edible species that are visually distinctive. More generally, and particularly with gilled mushrooms, separating edible from poisonous species requires meticulous attention to detail; there is no single trait by which all toxic mushrooms can be identified, nor one by which all edible mushrooms can be identified.

People who collect mushrooms for consumption are known as mycophagists, and the act of collecting them for such is known as mushroom hunting, or simply "mushrooming". 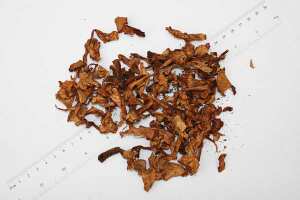 Dried mushrooms are a very useful ingredient to have in your kitchen. They have an almost infinite shelf life. Unless you have access to a very good greengrocer, dried mushrooms are almost the only way to obtain exotic mushroom varieties. Dried mushrooms usually require soaking in boiled water for an hour to return them to an edible state (the liquor they have been soaked in is a great addition to stocks and sauces) Dried mushrooms usually have a stronger flavour than their fresh counterpart. A Chinese, or ethnic food wholesaler such as Seewoo is a good place to find some really unusual dried and fresh mushrooms that may be required for Chinese recipes.

Click the thumbnail for a larger image or the text link for detailed information.

How much does one cup of mushrooms weigh?

Wild mushrooms are at their best and in season during the following months: September, October & November.

The following 24 pages are in this category, out of 24 total.