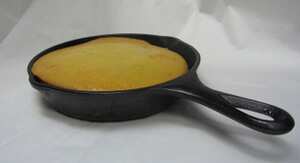 Cornbread is a generic name for any number of quick breads (a bread leavened chemically, rather than by yeast) containing cornmeal. As maize (also known as corn) is native to North America, it is not surprising that the various kinds of cornbreads are more prevalent in the New World. However, in Italy, the corn-based mush known as polenta is sometimes fashioned into a fried form resembling cornbread.

We have a number of cornbread recipes: