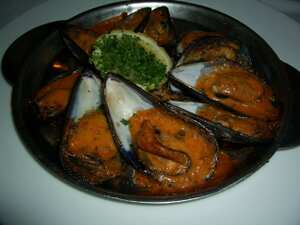 There is archaeological evidence that humans have utilised mussels as a source of food for thousands of years. Nowadays marine mussels remain a popular seafood, especially in Belgium and the Netherlands, and France (called Moules marinières), where they are consumed with French fries ("mosselen met friet" or "moules frites"). In France, the Éclade des Moules is a mussel bake popular along the beaches of the Bay of Biscay. In Italy, they are popular, often mixed with other sea food, or eaten with pasta. In Turkey, mussels are either covered with flour and fried on shishs ('midye tava'), or filled with rice and served cold ('midye dolma') and are usually consumed with alcohol (mostly with raki or beer). In Cantonese cuisine, mussels are cooked in a broth of garlic and fermented black bean. In New Zealand, they are commonly served in a chili-based vinaigrette.

Mussels can be smoked, boiled, steamed or fried in batter.

As with all shellfish, mussels should be checked to make sure they are still alive just before they are cooked; they quickly become toxic after they die. A simple criterion is that live mussels, when in the air, will shut tightly when disturbed. Open, unresponsive mussels are dead, and must be discarded. Closed mussel shells that are unusually heavy should be discarded as well, because they usually contain only mud. They can be tested to see if they are full of mud or sand by slightly moving the two shells away from each other.

Although mussels are valued as food, mussel poisoning due to toxic planktonic organisms can be a danger along some coastlines. For instance, mussels should be avoided along the west coast of the United States during the warmer months. This poisoning is usually due to a bloom of dinoflagellates (red tides), which contain toxins. The dinoflagellates and their toxin are harmless to mussels, even when concentrated by the mussel's filter feeding, but if the mussels are consumed by humans, the concentrated toxins cause serious illness, such as paralytic shellfish poisoning. Usually the U.S. government monitors the levels of toxins throughout the year at fishing sites.

Mussels are at their best and in season during the following months: October, November, December, January, February & March.