5/5 Unfortunately, these are but a memory until next season, which in March, is months away. The Judge

I've been searching for a pickled walnut recipe for a long while, but can only find a recipe for pickling whole green walnuts. The only information I can find, unhelpfully seems to be cloned all over the Internet.

This is my original attempt at pickling walnuts that have the shells removed.

35 large walnuts, once shelled are enough to fill one 500 ml Kilner jar. 350 ml of sherry vinegar will cover the nuts.

Hopefully the procedures and measurements will be useful to anyone else attempting this.

Preparing the walnut kernels for pickling

2 days before the pickling is to start

I tried a few different variations as there were plenty of walnuts available locally. When they are ready I will let you know which worked, and which did not! 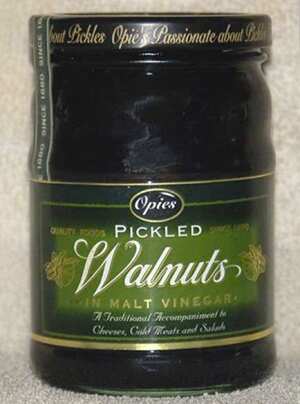 Pickled walnuts are a traditional English pickle made by pickling walnuts in malt vinegar. They are commonly served with cold meats and cheeses such as Stilton. There use in the United Kingdom dates back to before 1800, however there is some evidence that walnuts were pickled in the Persian area some 8000 years ago.

However, there he lay, and I have heard my uncle say, many a time, that the man said who picked him up that he was smiling as merrily as if he had tumbled out for a treat, and that after they had bled him, the first faint glimmerings of returning animation, were his jumping up in bed, bursting out into a loud laugh, kissing the young woman who held the basin, and demanding a mutton chop and a pickled walnut. He was very fond of pickled walnuts, gentlemen. He said he always found that, taken without vinegar, they relished the beer.

They are also an ingredient in Wow-wow sauce, historically served with beef.