(Redirected from Stews and casseroles) 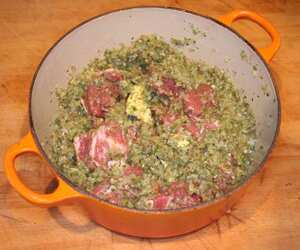 Lamb tangia before 5 hours of stewing

In this category you will find recipes for stews and casseroles, many of which are cooked for a prolonged period of time so are suitable for slow cooking. Some of the recipes might be strange or unusual but hopefully they will give you some ideas and inspiration. Ingredients in a stew can include any combination of vegetables (potatoes, beans, etc.), fruits (such as peppers and tomatoes), meat, poultry, sausages and seafood. While water can be used as the stew-cooking liquid, wine, stock, and beer are also common. Seasoning and flavourings may also be added. Stews are typically cooked at a relatively low temperature (simmered, not boiled), to allow flavours to combine. The distinctions between stew, soup, and casserole are subtle and not always easy to judge. The ingredients of a stew may be cut into larger pieces than a those of a soup and retain more of their individual flavours; a stew may have thicker liquid than a soup, and more liquid than a casserole; a stew is more likely to be eaten as a main course than as a starter, unlike soup; and a stew can be cooked on either the stove top (or range) or in the oven, while casseroles are almost always cooked in the oven, and soups are almost always cooked on the stovetop.

Stews may be thickened by reduction, but are more often thickened with flour, either by coating pieces of meat with flour before searing, or by using a roux or beurre manié, a dough consisting of equal parts of butter and flour. Other thickeners like cornflour (cornstarch) or arrowroot may also be used.

Pages in category "Stews and casseroles"