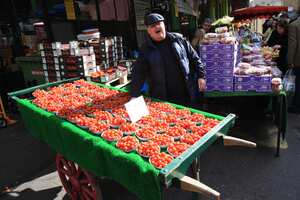 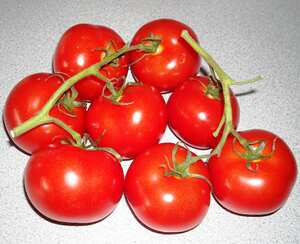 Tomatoes are now eaten freely throughout the world, and their consumption is believed to benefit the heart among other things. Lycopene, one of nature's most powerful antioxidants, is present in tomatoes.

Though it is botanically a berry, a subset of fruit, the tomato is nutritionally categorized as a vegetable. Since "vegetable" is not a botanical term, there is no contradiction in a plant part being a fruit botanically while still being considered a vegetable.

Tomatoes are used extensively in Mediterranean and Middle Eastern cuisine, with Italian being the most notable. The tomato has an acidic property that is used to bring out other flavours. This same acidity makes tomatoes especially easy to preserve in home canning as tomato sauce or tomato puree. Unripe green tomatoes can also be used to make salsa, be breaded and fried, or pickled.

A plum tomato or paste tomato is a type of tomato bred for sauce and packing purposes. They are generally oval or cylindrical in shape, with significantly fewer seed compartments than standard round tomatoes (usually only two) and a generally higher solid content, making them more suitable for processing. Plum tomatoes are also sometimes favoured by cooks for use during the tomato off season, as they are generally considered more amenable to handling and are therefore available in a state closer to ripe than other supermarket tomatoes.

The most commonly available varieties are Roma VF and San Marzano (semi-determinate; a signature tomato of Italian cuisine), though there are many other varieties, such as the short season Ropreco Paste and the larger Amish Paste and Big Mama. Small plum tomatoes (similar in size to cherry tomatoes) are known as grape tomatoes.

Try these simple tomato sauce recipes, they are ideal for pizza toppings or as a sauce for pasta, meatballs etc. Some of them are also a great way to use up a glut of home-grown tomatoes.

How much does one cup of tomatoes weigh?

Tomatoes are at their best and in season during the following months: July, August, September & October.