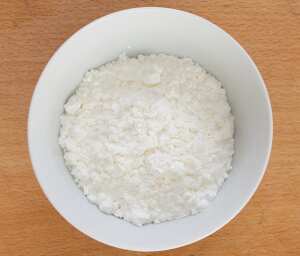 Cornflour is commonly referred to a cornstarch outside of the UK.

Cornflour is often used as a binder in puddings and similar foods. Most of the packaged pudding mixes available in grocery stores include cornstarch. Cornflour puddings can be made at home easily by using a double boiler. The most basic such pudding is made from milk, sugar, cornflour and a flavouring agent.

Cornflour can be used as a thickener in many recipes. Because cornflour tends to form lumps when mixed with warm or hot water, it is best dissolved in cold water. It is also found in many gluten-free recipes.

It is an important flour in Indian cuisine and is used for a range of breads such as roti and chapati. Cornflour is similar to corn meal except that it is ground to a finer consistency than cornmeal. Corn flour acts as a thickening agent to a wide range of dishes and is specially useful for gluten-free quick breads as it contains no gluten.

Arrowroot is an alternative flour to use for thickening soups or stocks.

How much does one cup of cornflour weigh?