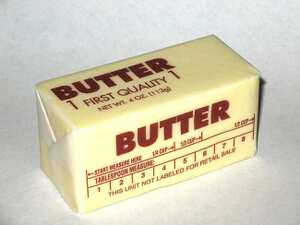 A packet of butter

Butter is a dairy product made by churning fresh or fermented cream or milk. Butter is used as a spread and a condiment, as well as in cooking applications such as baking, sauce making, and frying. Butter consists of butterfat surrounding minuscule droplets consisting mostly of water and milk proteins. The most common form of butter is made from cows' milk, but it can also be made from the milk of other mammals, including sheep, goats, buffalo, and yaks. Rendering butter produces clarified butter or ghee, which is almost entirely butterfat. When refrigerated, butter remains a solid, but softens to a spreadable consistency at room temperature.

Most categories of butter are sold either in salted and unsalted forms. Either granular salt or a strong brine are added to salted butter during processing. In addition to the enhanced flavour, the addition of salt acts as a preservative. For most culinary uses, purists prefer unsalted butter.

Do not use 'spreads' in place of butter. Most spreads contain very high amounts of water and are therefore not suitable for culinary use. If you don't have butter, use olive oil.

Why use unsalted butter?

If a recipe calls for unsalted butter it is probably to reduce the total amount of salt used in the recipe. The amount of salt quickly adds up - for example, there is almost a teaspoon of salt in a 250g packet of butter!