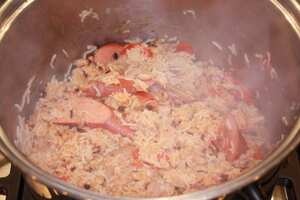 The rice is tender and the liquid is absorbed

Hoppin' John is the Southern United States' version of the rice and beans dish traditional throughout the Caribbean. It consists of field peas or crowder peas (black-eyed peas) and rice, with chopped onion and sliced bacon or sausages, ham hock or fatback bacon.

Throughout the coastal South, eating Hoppin' John on New Year's Day is thought to bring a year filled with luck, and it's eaten by everyone. The peas, or beans with little black "eyes," signify coins. Fill your plate with them and your cup will run over, as in the 23rd Psalm, perhaps. Collard greens along with this dish are supposed to also add to the wealth since they are the colour of money. On the day after New Year's Day, leftover "Hoppin' John" is called "Skippin' Jenny", and further demonstrates one's frugality, bringing an even better chance of prosperity in the New Year, it is hoped.

If you like a bit more gravy then reduce the amount of rice. You could of course increase the amount of stock but you would need to adjust the seasoning as well.