Lamb tagine with tomatoes and peas

Just made this - very nice. 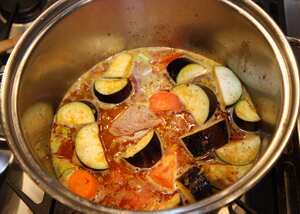 Ready for a 2 hour simmer

Another slow-cooked lamb dish that has Middle Eastern origins. The original recipe was from one of the wonderful Moro books by Sam and Sam Clark, but as always, when it comes to cooking it, I use up bits and bobs found in the fridge and change it out of all recognition to the original recipe.

The fatty pork chop would never be in the original recipe which would be muslim in origin, however, it was spare in the fridge and adds a nice flavour to the oil

Serve with couscous or crusty bread

Directly from the pot it was quite liquid, which went very well with fresh bread, the next day though, the gravy had thickened up naturally. If you wanted a thicker sauce, just stir in a few teaspoons of cornflour, mixed with a tablespoon of water and heat for a few minutes whilst stirring.