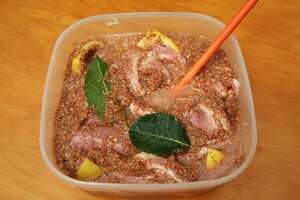 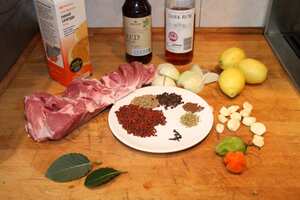 The ingredients for cochinita pibil

Preparation of traditional cochinita or puerco pibil involves marinating the meat in strongly acidic citrus juice, colouring it with annatto seed, and roasting the meat while it is wrapped in banana leaf. Tin foil now provides a modern substitute. Traditionally, cochinita pibil was buried in a pit with a fire at the bottom to roast it. The Mayan word "pibil" means "buried".

Grind to a powder

As far as I can ascertain, the traditional way to serve this would be whole on plain rice with a salad and black beans or to shred the meat and serve in a rolled flour tortilla with a little salsa.

When we had this, somewhat unconventionally, we treated Cochinita pibil as you would Peking duck. Shred the pork, serve with julienned spring onions, julienned cucumber, green salad, halved flour tortillas, sour cream, garlic mayonnaise and a variety of Chinese sauces such as plum sauce, hoisin sauce etc. Spread a tortilla with dips of your choice, add a little salad and shredded pork, roll up and devour. An absolute and total success!

The fourth time I cooked this, we ate half of it 'Chinese style' and made a wonderful curry with the second half. Just fried up some onions, celery, garlic with my favourite curry paste, added a can of coconut milk and a can of chick-peas simmered it for an hour or so and served it with rice and peas. That stretched it out for another 2 days!

I had no tequila so used dark rum instead. In Mexico we use sour orange juice, not the regular oranges, but you can use only lemon juice and vinegar.

2 unseeded Scotch bonnet chili peppers made this dish very hot, delicious,but bearable. Remove the seeds if you don't want it too hot, or use a different chilli.

If you have made the dish very (chili) hot, it's probably a good idea to separate the meat from the sauce before shredding the meat and serve the sauce separately. For the sake of you heart, leave it to settle for a bit then drain most of the fat off. It will be just as delicious, but much better for you.

Having made this a number of times, I now follow Jamie Oliver's idea for cooking slow roast lamb, let the oven reach its highest setting, the moment you put the meat in the oven, reduce the heat to 160° C (325° F - gas 3).

You can avoid using chilli, in Mexico, Cochinita Pibil is not hot at all, we don't use any chilli. -- User:Myrna_Amor_Miranda