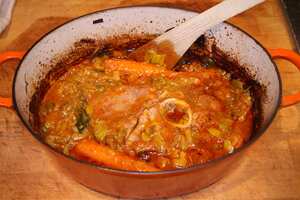 This category contains recipes where primary method of cooking is stewing, braising or pot roasting. 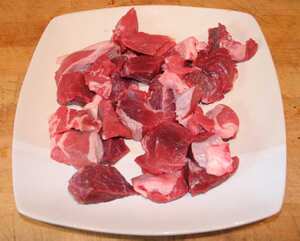 A stew is a combination of solid food ingredients that have been cooked in water or other water-based liquid, typically by simmering, and that are then served without being drained.

Ingredients in a stew can include any combination of vegetables (potatoes, beans, etc.), fruits (such as peppers and tomatoes), meat, poultry, sausages and seafood. While water can be used as the stew-cooking liquid, wine, stock, and beer are also common. Seasoning and flavourings may also be added. Stews are typically cooked at a relatively low temperature (simmered, not boiled), to allow flavours to marry.

The distinctions between stew, soup, and casserole are fine ones. The ingredients of a stew may be cut into larger pieces than a those of a soup and retain more of their individual flavours; a stew may have thicker liquid than a soup, and more liquid than a casserole; a stew is more likely to be eaten as a main course than as a starter, unlike soup; and a stew can be cooked on either the stove top (or range) or in the oven, while casseroles are almost always cooked in the oven, and soups are almost always cooked on the stove-top. There are exceptions; for example, an oyster stew is thin bodied, more like a soup. The choice of name is largely a matter of custom; it is possible for the same dish to be described as soup, stew, or casserole. 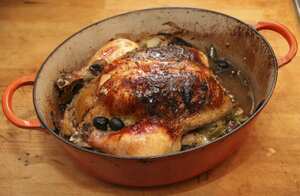 Stews may be thickened by reduction, but are more often thickened with flour, either by coating pieces of meat with flour before searing, or by using a roux or beurre manié, a dough consisting of equal parts of butter and flour. Other thickeners like cornstarch or arrowroot may also be used.

Braising (from the French “braiser”) is a combination cooking method using both moist and dry heat; typically the food is first seared at a high temperature and then finished in a covered pot with a variable amount of liquid, resulting in a particular flavour.

Braising relies on heat, time, and moisture to successfully break down tough connective tissue and collagens in meat. It is an ideal way to cook tougher cuts. Many classic braised dishes such as Coq au Vin are highly-evolved methods of cooking tough and unpalatable foods. Swissing, stewing and pot-roasting are all braising types. Braising is a form of pressure cooking.

Most braises follow the same basic steps. The meat or poultry is first seared in order to brown its surface and enhance its flavour. Aromatic vegetables are sometimes then browned as well. A cooking liquid that often includes an acidic element, such as tomatoes, beer, or wine, is added to the pot, often with stock, to not quite cover the meat. The dish is cooked covered at a very low simmer until meat is fork tender. Often the cooking liquid is finished to create a sauce or gravy.

What is Pot roasting?

Pot roasting is a method of slowly cooking meat in a covered pot. It produces moist meat, making it ideal for older and/or less-expensive cuts; because the method does not require an oven, it may prove an economical option for those of limited means. The pot with meat (usually beef) and a little water, and often root vegetables, cooks over a low flame or in a medium oven.

Pot roast may also mean the specific recipe or meal produced by this method.

The meat most closely associated with this style, beef, is prepared by browning a roast-sized piece of beef (taken from the tougher chuck cut), then slow-cooking it in an acidulated liquid in a covered dish.