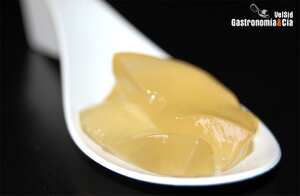 This unusual recipe has been translated and adapted from Gastronomía y Cía.

For the ginger jelly

For the baba ghanoush

For the osso bucco

To make the ginger jelly

To make the baba ghanoush

To make the osso bucco

Serve the whole thing with a teaspoon of ginger jelly on the side and the cooled baba ghanoush. If desired, garnish with a crispy apple.

Do not throw away the strained off grated ginger as it can be used in puddings.

There is no need to peel ginger. As a result of attending a Thai cookery demo, we have learnt that peeling ginger is unnecessary unless for aesthetic purposes as the skin is high in fibre and full of flavour. However, do remove any bits that have become tough or woody.