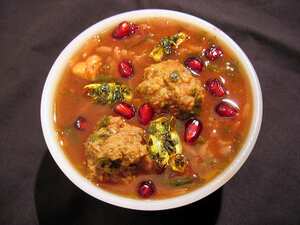 In culinary terms, the Middle East is quite difficult to define as its influence is strongly felt in countries such as Greece and Morocco, which are not part of the Middle East, and therefore a definition of the recipes included in this category is called for. North Africa has a separate category and includes recipes from Morocco, Algeria, Tunisia, Ethiopia and Libya. Greece and Turkey also have their own categories because since the tourism boom in those countries, their cuisine has become more well-known. Therefore in this category you will find wonderful recipes from Egypt, Palestine, Lebanon, Jordan, Israel, Syria, the Arabian peninsula, Iran and Iraq.

The cuisine of this region is very diverse, from the rice dishes encrusted with jewel-like fruits from Iran, to the simple, but delicious ful medames of Egypt. For religious reasons, you will not find any recipes containing pork or blood and alcohol is rarely used in Middle Eastern cooking.

We have a list of suppliers of Middle Eastern ingredients.