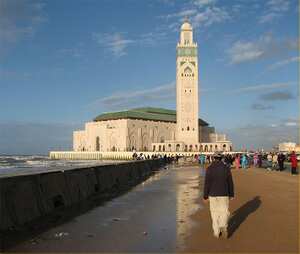 In this category you will find recipes from Morocco. Moroccan cuisine is a very diverse cuisine, with many influences, due to the interaction of Morocco with the outside world for centuries. The cuisine of Morocco is a mix of Berber, Moorish, Mediterranean, and Arab influences. The cooks in the royal kitchens of Fez, Meknes, Marrakesh, Rabat and Tetouan refined Moroccan cuisine over the centuries and created the basis for what is known as Moroccan cuisine today. Morocco produces a large range of Mediterranean fruits and vegetables and even some tropical ones. The country produces large quantities of sheep, cattle, poultry, and seafood which serve as a base for the cuisine. Characteristic flavouring ingredients in cooked dishes include preserved lemons, cold-pressed, unrefined olive oil and dried fruits. It is also known for being highly spiced as opposed to Middle Eastern cuisine.

The midday meal is the main meal, with the exception of the holy month of Ramadan. The typical meal begins with a series of hot and cold salads, followed by a tagine. Bread is eaten with every meal. Often, for a formal meal, a lamb or chicken dish is next, followed by couscous topped with meat and vegetables. A cup of sweet mint tea is commonly used to end the meal. Moroccans almost always eat with their hands and use bread as a utensil.

The main Moroccan dish most people are familiar with is couscous, an old delicacy probably of Berber origin. Beef is the most commonly eaten red meat in Morocco. Lamb is preferred, but is not as common due to its higher cost. Poultry was historically used and the importance of seafood is increasing in Morocco. The breed of sheep in North Africa has much of its fat concentrated in its tail, which means that Moroccan lamb does not have the pungent flavour that western lamb and mutton can have. Among the most famous Moroccan dishes are couscous, pastilla (also spelled bsteeya or bestilla), tajine, tanjia and harira. Although the latter is a soup, it is considered as a dish in itself and is served as such or with dates especially during the month of Ramadan.

Salads include both those made from raw ingredients as well as many that are made from cooked vegetables and served either hot or cold. The latter include zaalouk, an aubergine and tomato mixture. Desserts are not usually served at the end of a Moroccan meal. Seasonal fruits are typically served at the end of meals. A common dessert is kaab el ghzal ("gazelle's horns"), which is a pastry stuffed with marzipan and topped with sugar. Another dessert is " Halwa shebakia " it is honey cake, which is essentially pretzel-shaped pieces of dough deep-fried and dipped into a hot pot of honey and sprinkled with sesame seeds. Halwa shebakia are biscuits eaten during the month of Ramadan.

The most popular drink is green tea with mint. Traditionally, making good mint tea in Morocco is considered an art form and the drinking of it with friends and family members is one of the important rituals of the day. The technique of pouring the tea is as crucial as the quality of the tea. The tea is accompanied with hard sugar cones or lumps. Moroccan tea pots have long, curved pouring spouts and this allows the tea to be poured evenly into tiny glasses from a height. To acquire the optimum taste, glasses are filled in two stages. The Moroccans traditionally like tea with bubbles, so while pouring they hold the teapot high above the glasses.

Street food has long been a tradition, and the best example is Djemaa el Fna square in Marrakech. Starting in the 1980s, new snack restaurants started serving "Bocadillo" (which is a Spanish word for a sandwich, widely used in Morocco). Though the composition of a bocadillo varies by region, usually the bocadillo is a baguette filled with salad and a choice of meats, fish (usually tuna), or a dense egg omelette.

Dairy product shops (Mahlaba in Moroccan Arabic) are open throughout cities in Morocco. Those mahlabas generally offer all types of dairy products, juices, and breakfasts as well as bocadillos, competing with former established snack restaurants. The late 1990s experienced the opening of franchises of multinational fast food chains, especially in major cities.

The following 46 pages are in this category, out of 46 total.