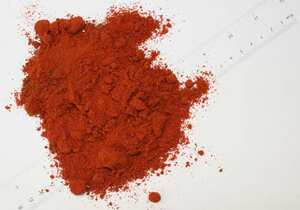 Paprika is a spice made from the grinding of dried sweet red bell peppers (Capsicum annuum). In many European countries, the name paprika also refers to bell peppers themselves. The seasoning is used in many cuisines to add colour and flavour to dishes.

Paprika is used as an ingredient in a broad variety of dishes throughout the world. Paprika (pimentón in Spain, colorau in Portugal, chiltoma in Nicaragua, but these "paprikas" are not made exclusively from bell peppers, other varieties are used, and there are several hot and sweet "paprikas") is principally used to season and colour rices, stews, and soups, such as goulash. In Spain, Germany, Hungary, Slovakia, Bosnia and Herzegovina, Croatia, Serbia, Romania, Bulgaria, Turkey and Portugal, paprika is also used in the preparation of sausages as an ingredient that is mixed with meats and other spices. Paprika may be smoked for additional flavour.

In India, a similar powdered spice comes from a fruit locally called 'deghi mirchi', which is grown widely and takes on a slightly different flavour, depending on local soil and climatic conditions. The hottest paprikas are not the bright red ones, but rather the palest red and light brown coloured ones.

Smoked paprika powder is worth keeping in the store cupboard if you can find it as it is a good way of adding a subtle flavour to many dishes.

If paprika is overheated it will become very bitter.

You will probably have to buy ready ground paprika. Keep it out of the light otherwise it loses it's brilliant colour.