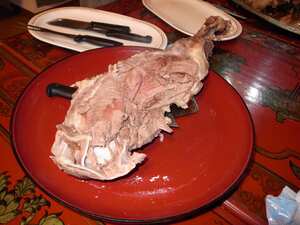 In this category you will find recipes that contain mutton as a main ingredient. Some of the recipes might be strange or unusual but hopefully they will give you some ideas and inspiration. A basic definition for mutton is a female (ewe) or castrated male (wether) sheep that is more than two years old. For the past few decades there has been a severe decline in the production on mutton. Some blame this on the increasing manufacture of synthetic fibres since the 1950s, thus reducing the need for pure wool. Also when lamb gradually became more affordable, the public bought less mutton, which was seen as a poor man's food. However, since 2004, its production has been promoted by Prince Charles' 'Mutton Renaissance' which has resulted in a 20% increase in sales over the last couple of years. It has also help to ensure that farmers get a decent price for their sheep. Currently, much mutton is produced in the north of England, Scotland and Wales and Prince Charles' 'Mey Selections' (part of the North Highland Initiative) produces it on North Ronaldsay in the Orkney Islands. Now that top chefs are increasingly adding it to their menus, it does look set to become more popular.

Mutton in the UK

Outside of London, the easiest way to buy mutton is online and we have a list of specialist meat suppliers. However, should you wish to see before you buy, visit your nearest Asian butcher or grocer as they often have mutton for sale.

The following 37 pages are in this category, out of 37 total.