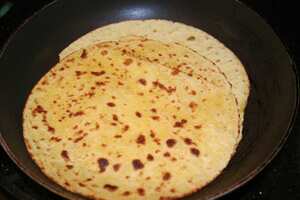 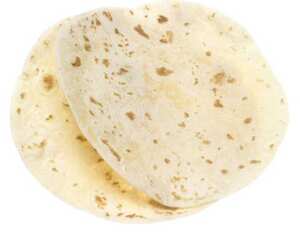 The Spanish word tortilla denotes two different classes of foods, depending on where the term is encountered.

But it is the Mexican meaning of "tortilla" that is most familiar to North Americans, and possibly most of the world outside of Europe and South America, where the original Spanish meaning is best known. 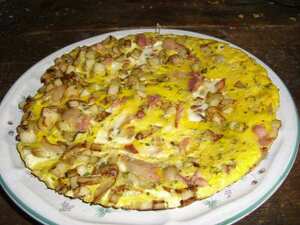 The flour tortilla is used to make burritos and Enfrijoladas amongst others. Wheat tortillas are also a traditional staple of the peoples of northwestern Mexican states (such as Sonora and Chihuahua) and many southwestern US Native American tribes.

Maize tortillas are known in the Basque region of Spain as talo and were a traditional Basque farmers' staple until the introduction of railborne wheat flour suitable for bread. There are maize tortillas in other regions of Northern Spain, such as Asturias, where they are called frixuelos, and Galicia, where they receive the name of filloas.

Flour or maize tortillas are best cooked on an extremely hot tava with no oil. Once the tava is really hot, heat the tortilla for a minute on each side just to warm and colour it.

In Panama, a tortilla is a deep fried cornmeal disk, slightly smaller than a hockey puck.

A tortilla as an omelette

In Spain and South America, a tortilla is any omelette, often a round, layered omelette (i.e., not folded over), most typically made with layers of eggs, very thinly sliced potatoes, such seasonings as the chef desires, and cooked in vegetable oil. It is usually served cold as an appetiser or bar snack. The terms Spanish tortilla, tortilla española or tortilla de patatas all refer to a common recipe in Spain, an omelette with stir fried potatoes and chopped onion, often served as a staple food in Spanish bars and cafés. American versions of Spanish and South American tortilla are usually cooked in vegetable shortening, commonly with bell pepper and/or onion and/or chives; and typically served warm instead of cold. 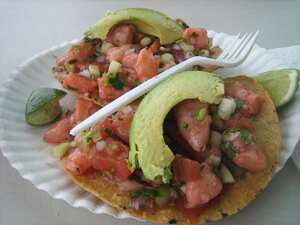 Tostada is a Spanish word translating to "toasted" in English and, in Latin American cuisine, refers to a flat tortilla that is toasted or deep fried. It also refers to the finished dish using a tostada. Corn tortillas are used more than ones made of wheat flour for this purpose.

The tostada was created when tortillas went stale but were still fresh enough to eat. Not wanting to waste old tortillas, which was one of the staple foods of the Mexican people, beans, rice, meat, cheese and vegetables were spread onto the tortillas like an "open faced" taco. This invention became very popular and people soon began to fry fresh tortillas to recreate the dish.

A tostada is often served as an appetiser typically topped with a thin layer of refried black bean paste (frijoles refritos), chicken or beef strips or other kinds of animal products. These are usually topped with thinly chopped lettuce strips, sour cream, chopped onion, salsa and guacamole or sliced avocados. As a general rule, due to the flat construction of the tostada, the main topping (i.e. bean paste or meat) must be sticky or pasty enough to stay on the tostada. This helps prevent the other toppings or garnishes from falling off while it's being eaten.

In addition to items typically used as taco fillings, tostadas are popular topped with seafood, such as tuna, shrimp, and ceviche. A tostada vegetariana is only topped with vegetables.

In Tex-Mex cuisine, tostadas are often referred to as tortilla chips and are also served as an appetiser or meal, without toppings, but with sauce or salsa for dipping. 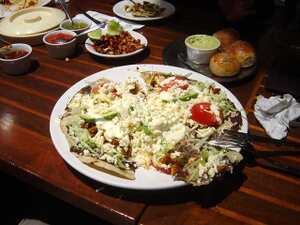 Tlayudas, sometimes spelled Clayuda , is a part of Mexican Cuisine, consisting of a big crunchy tortilla covered with a spread of refried beans, asiento (unrefined pork lard), lettuce, meat (usually shredded chicken, beef tenderloin and/or pork), Oaxaca cheese or other cheese, and salsa. They are a popular antojito, or snack food, in Oaxaca, particularly around Oaxaca City.

The rules for topping a tlayuda are not strict, and restaurants and street vendors in Oaxaca often offer a variety of different toppings. Popular toppings include tasajo (a style of beef), chorizo, and cecina enchilada (thin strips of chili powder encrusted pork). The dinner-plate-sized tortilla is baked, not fried, either on a comal (tava), a grill, or directly on the coals. They may be prepared open-faced or folded in half.