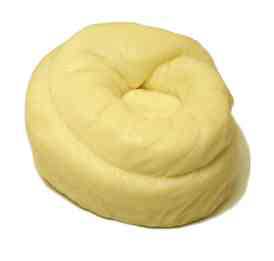 Oaxaca Cheese (or Queso Oaxaca) is a white, semi-hard cows' milk cheese of Mexican origin, similar to non aged Monterey Jack cheese but with a stringy texture when hot, rather like mozzarella. It is named after the state of Oaxaca in southern Mexico, where it was first made. It can be made into several different shapes, which can make it easier to eat. It is also known as quesillo or thread cheese when shaped like a ball. Asadero (meaning "roaster" or "broiler", also called queso quesadilla), a similar cheese, is shaped in bricks and sliced.

The production process is complicated and involves stretching the cheese into long ribbons and rolling it up like a ball of yarn. Mozzarella is another cheese which is processed by stretching (pasta filata process). "El Mexicano" brand Queso Oaxaca from San Jose, California, describes itself as "Mexican Style Mozzarella." There is a spicy version flavoured with cherry pits.

It is used in typical cuisine, such as in quesadillas, which are tortillas with melted oaxaca cheese, and for which there are variations (like Quesadillas de Flor de Calabaza where the quesadilla is stuffed with pumpkin flower) depending on the stuffing used (chicharrón, chorizo, jamon de york, etc) in addition to the cheese.

Due to its excellent melting qualities, asadero is frequently used as the base for nachos or queso blanco (literally "white cheese"), a dip popular in Mexican restaurants.

If the Oaxaca cheese is not listed below, select a similar type of cheese from the list below to get a rough idea for the number of calories in Oaxaca cheese.