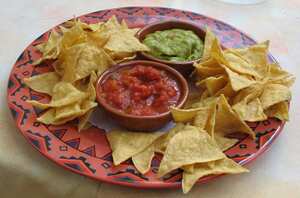 A tortilla chip is a snack food made from corn tortillas, which are cut into wedges and then fried (alternately they may be discs pressed out of corn masa then fried or baked). Corn tortillas are made of corn (maize), vegetable oil, salt and water. Although first mass produced in Los Angeles in the late 1940s, tortilla chips are considered to be a Mexican food. Though usually made of yellow corn, they can also be made of white, blue, or red corn.

The tortilla chip was popularised by Rebecca Webb Carranza as a way to make use of misshapen tortillas rejected from the automated tortilla manufacturing machine that she and her husband used at their Mexican delicatessen and tortilla factory in southwest Los Angeles. Carranza found that the discarded tortillas, cut into triangles and fried, were a popular snack, and she sold them for a dime a bag at the El Zarape Tortilla Factory. In 1994, Carranza received the Golden Tortilla award for her contribution to the Mexican food industry. She died in Phoenix, Arizona, on January 19, 2006, at the age of 98.

Tortilla chips are the quintessential and often complimentary appetiser in Tex-Mex and Mexican restaurants in the U.S. and elsewhere. Their popularity outside of California saw a steady rise in the late 1970s when they began to compete with corn chips, the dipping chip of choice during the first three quarters of the 20th century. They are typically served with a dip, such as salsa, chili con queso, or guacamole. When not served with a dip, the chips are often seasoned with herbs and spices. Although now available worldwide, the United States is one of the main markets for tortilla chips. Commercial brand names for tortilla chips include Tostitos and Doritos.

A more elaborate dish utilising tortilla chips is nachos, which consists tortilla chips served with melted or shredded cheese, although often other toppings are added or substituted, such as meat, salsa (such as pico de gallo), refried beans, guacamole, sour cream, diced onions, olives, and pickled jalapeños. More elaborate nachos are often baked for a short period of time to warm the tortillas and melt shredded cheese. First created circa 1943 by Ignacio "Nacho" Anaya, nachos may represent the earliest known creation of tortilla chips.

Try making your own Homemade tortilla chips. It only requires soft corn tortillas, vegetable oil and a frying pan!