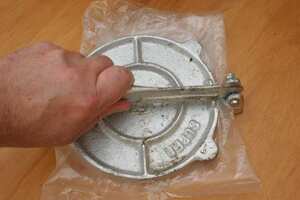 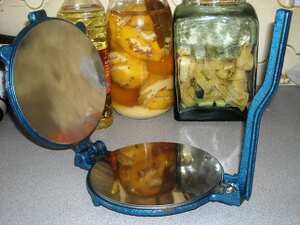 A tortilla press is a tool that is used as an alternative to rolling when making maize tortillas.

A walnut sized ball of dough is placed in the centre of the press, usually between two greased or floured layers of plastic (or plastic bags) to prevent sticking, and the tortilla is pressed into shape by the leverage attached to the press.

I have had a few tortilla presses and would only recommend a metal press. Wooden ones usually break under the immense pressure forces involved/required.

You can buy Tortilla Presses online from Cool Chile Co, www.mexgrocer.co.uk or from their restaurant Mestizo in London or Google if you're trying to find one!

If you don't have a tortilla press, use 2 chopping boards or just two sheets of wood as a substitute. Place ball of dough between two non-stick surfaces such as small squares of Bake-O-Glide and stand on them!