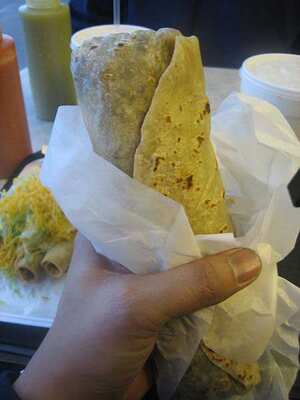 A burrito or taco de harina is a type of food found in Mexican and Tex-Mex cuisine. It consists of a flour tortilla wrapped or folded around a filling. The flour tortilla is usually lightly grilled or steamed, to soften it and make it more pliable. In Mexico, refried beans, Spanish rice, or meat are usually the only fillings and the tortilla is smaller in size. In the United States, however, fillings generally include a combination of ingredients such as Spanish rice, beans, lettuce, salsa, meat, guacamole, cheese, and sour cream, and the size varies, with some burritos considerably larger than their Mexican counterparts.