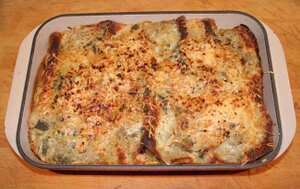 An enchilada is a traditional Mexican dish, which is made in many very different ways. It is typically made with a corn (maize) tortilla dipped briefly in hot lard or oil to soften then dipped in the chosen enchilada sauce. The tortillas are filled and rolled up, placed in a casserole dish, then layered with sauce and possibly other additions such as cheese and chopped onions or olives. You can also add cream on the top and accompany your dish with Mexican fried beans.

Enchiladas can be filled with almost anything, depending on the cook's taste and means. While enchiladas made with meat or cheese fillings are very popular (chicken enchiladas being common), vegetables, seafood or eggs.

The difference between enchiladas and burritos is the tortilla. Enchiladas are made with corn (maize) tortillas, burritos are made with wheat flour tortillas. Burritos are also often served singly as hand-held take-away food. But at the same time they are very similar because both can include a variety of meat, chicken, cheese, chorizo etc... and they are also eaten at any time of the day. Very popular in Mexico