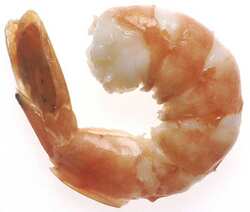 As used in commercial farming and fishery, the terms prawn and shrimp are generally used interchangeably. In European countries, particularly the United Kingdom, the word “prawns” is far more common on menus than the term “shrimp”, which is generally only used in North America. The term “prawn” is also loosely used to describe any large shrimp, especially those that come 15 (or fewer) to the pound (also called “king prawns”). Australia and other Commonwealth countries follow this European/British use to an even greater extent, using the word “prawn” almost exclusively. (Paul Hogan’s use of the phrase “I'll slip an extra shrimp on the barbie for you” in a television advertisement was intended to make what he was saying easier for his American audience to understand, and was thus a deliberate distortion of what an Australian would typically say.) In Spain, gambas al ajillo (translated to garlic prawns) is a popular dish with both the locals and tourists, traditionally served as tapas.

Information on dried shrimps, commonly used in Asian cookery can be found here.

Crangon crangon is a commercially important species of shrimp fished mainly in the southern North Sea, although also found in the Irish Sea, Baltic Sea, Mediterranean Sea and Black Sea, as well as off much of Scandinavia and parts of Morocco's Atlantic coast. Its common names include brown shrimp, common shrimp, bay shrimp, and sand shrimp.

Brown shrimp are often prepared in the potted style in the UK. In Belgium, a typical dish is tomate-crevette: a tomato filled with shrimps in mayonnaise. In the coastal areas of Belgium, fresh unpeeled shrimp are often served as a snack accompanying beer (typically a sour ale such as Rodenbach).

How much does one cup of prawns / shrimp weigh?