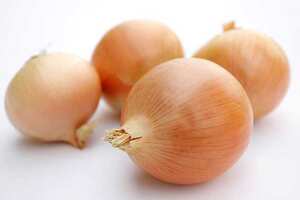 Onions, one of the oldest vegetables known to mankind, are found in a bewildering array of recipes and preparations, spanning almost the totality of the world's cultures; they are nowadays available in fresh, frozen, canned, pickled, and dehydrated forms. Onions can be used, usually chopped or sliced, in almost every type of food, including cooked foods and fresh salads, and as a spicy garnish; they are rarely eaten on their own but usually act as accompaniment to the main course. Depending on the variety, an onion can be sharp, spicy, tangy and pungent or mild and sweet.

Onions pickled in vinegar are eaten as a snack. These are often served as a side serving in fish and chip shops throughout the United Kingdom. Onions are a staple food in India, and are therefore fundamental to Indian cooking. They are commonly used as a base for curries, or made into a paste and eaten as a main course or as a side dish.

Some really useful tips to stop your eyes stinging when you cut onions.

To minimize tears, chill onions before you cut them. This slows the release of the tear-producing compounds.

Use a sharp straight edge knife, versus a serrated edge, This will help reduce tearing because it will cause less damage to the cells of the onion. Remember: when you chop onions in a food processor, more cells are bruised than when you mince by hand – so the flavor will be stronger and could even produce a bitter taste.

This brilliant article from The Register explains the reasoning behind this in all the scientific detail.

How much does one cup of onions weigh?

Onions are at their best and in season during the following months: July, August, September & October.