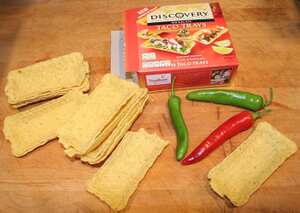 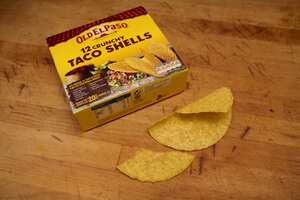 A taco shell is a crispy circular corn (maize) tortilla that is folded to form an envelope which can be filled with meats, salads and sauces.

The folded type of taco shell normally breaks and spills its contents on first bite. However, I've recently discovered (sic) a variation on the folded type, pictured above. It's a neat mouth sized tray! Brilliance! Our local Morrisons stock them, though I don't know about other supermarkets.

Use them in our minced beef for tacos recipe.

Around 2015 El Paso reduced the gross weight of the Taco shell pictured to such an extent that they fall apart when handled and no longer have any crunch as they are so thin - the packaging probably weighs more than the contents now. Well maybe not but it does annoy me how food manufacturers improve products when really all they are doing is trying to increase the bottom line. Avoid, avoid, avoid! The Discovery trays are much better, and cheaper though I've not seen them around lately and all on-line stockists ===See also===