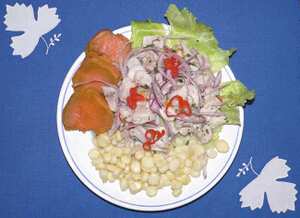 Ceviche is marinated in a citrus-based mixture, with lemons and limes being the most commonly used. In addition to adding flavour, the citric acid causes the proteins in the seafood to become denatured, which pickles or "cooks" the fish without heat. Ceviche can marinated for up to 3 hours.

Ceviche's birthplace is disputed between Peru and Ecuador, and as both countries have an amazing variety of fish and shellfish, it could easily have come from the ancient civilizations of Peru and Ecuador. Every Latin American country has given seviche/ceviche its own touch of individuality by adding its own particular garnishes. In Peru, it is served with slices of cold sweet potatoes or corn-on-the-cob. In Ecuador, it is accompanied by popcorn, nuts, or corn nuts.

In Ecuador, especially in the Quiteño tradition, shrimp ceviche tends to be made with ketchup or tomato sauce. The Manabí style, made with lime juice, salt and the juice provided by the shrimp itself is very popular. Occasionally one can find ceviche made with clam. It is served in a bowl with toasted corn kernels as a side dish (plantains and pop corn are also typical ceviche side dishes). Sea bass, octopus and crab ceviches are also common in Ecuador.

In Chile, ceviche is often made with fillets of halibut or Chilean sea bass, and marinated in lime and grapefruit juices, as well as finely minced garlic and red chile peppers. Often fresh mint and cilantro are added.

In Mexico and other parts of Central America, it is served in cocktail cups with crackers, or as a tostada topping and taco filling.

In Costa Rica, the dish includes marinated fish, lime juice, salt, ground black pepper, finely minced onions, cilantro and finely minced peppers. It is usually served in a cocktail glass with a lettuce leaf and soda crackers on the side as per Mexico. Popular condiments are tomato ketchup and tabasco. The fish is typically tilapia or corvina although mahi-mahi, shark and marlin are popular.

In the Philippines, ceviche is known as kinilaw or kilawin, and is prepared in a very similar fashion to the Latin American style: the raw fish is marinated in white coco vinegar, calamansi lime juice, chillies, onions, bell peppers, salt and julienned fresh ginger. The most common fish used is Spanish mackerel, but Filipinos make kinilaw from many other types of seafood, including oysters, shrimp, and whitebait. This is an example of "fusion" cuisine, as the preparation style was most likely influenced by trans-Pacific trade with Spaniards coming from the Americas and Europe.