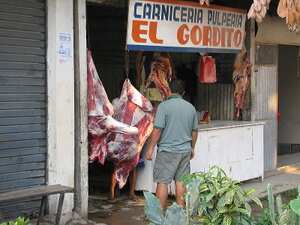 In this category you will find recipes from Peru in English. Peruvian cuisine stems mainly from the combination of Spanish cuisine with traditional native Peruvian ingredients, with later influences from other cuisines, particularly from China, Italy, west Africa and Japan. The three traditional staples of Peruvian cuisine are corn, potatoes and beans. These ingredients have been combined with a number of staples brought by the Spanish, such as rice, wheat and meat (such as beef, pork and chicken). Many traditional foods, such as quinoa, kiwicha, chillies and several roots and tubers which had previously been tossed aside for European products, have seen a resurgence in popularity in recent decades with a revival of interest in native Peruvian food crops.

From Peru to Spain

From Peru, the Spanish brought back to Europe foods which would become staples for many peoples around the world. Potatoes were considered livestock feed in Europe until French chemist Antoine-Augustin Parmentier began serving dishes made from the tubers at his lavish banquets. His guests were immediately convinced that potatoes were fit for human consumption. Parmentier's introduction of the potato is still discussed in Europe today.

From Spain to Peru

During the colonial period, and continuing up until the time of the Second World War, Peruvian cuisine focused on Spanish models and virtually ignored anything that could be regarded as native or Indian. Traditional food plants, which continued to be eaten by the natives, were regarded as "peasant food" and to be avoided at all costs. These colonial attitudes took a long time to subside. Since the 1970's, there has been a conscious effort to bring these native food plants out of obscurity. Some plants that were cultivated by the ancient societies of Peru have now been rediscovered by modern Peruvians and are carefully studied by scientists. Due to the characteristics of its land and climate and due to the nutritional quality of its products, some Peruvian plants will play a vital role in the nutrition of the future: this is true for quinoa, which is an excellent source of essential amino acids, and kañiwa which appear to be and are prepared like cereals but are not cereals. Root vegetables such as maca and real cereals like kiwicha are also plants nutritionists are researching today.

For many of Peru's inhabitants, these foodstocks allow for adequate nutrition even though living standards are poor. The abandoning of many of these staples during the Spanish domination and republican eras has brought down nutritional levels in the country. Peruvian cuisine is often made spicy by means of ají pepper, a basic ingredient. Some Peruvian chillies are not spicy but serve to give taste and colour to dishes (ají amarillo). Rice often accompanies dishes in Peruvian cuisine, and the regional sources of foods and traditions give rise to countless varieties of preparation and dishes.

The following 22 pages are in this category, out of 22 total.