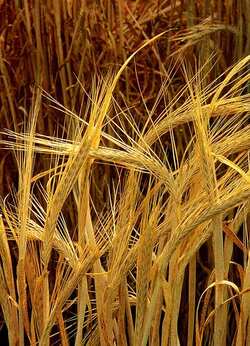 Barley (Hordeum vulgare) is an annual cereal grain, which serves as a major animal feed crop, with smaller amounts used for malting and in health food. It is a member of the grass family Poaceae. In 2005, barley ranked fourth in quantity produced and in area of cultivation of cereal crops in the world (560,000 km²). The domesticated form (H. vulgare) is descended from wild barley (H. spontaneum).

Half of the United States' barley production is used as an animal feed. A large part of the remainder is used for malting and is a key ingredient in beer and whisky production. Two-row barley is traditionally used in German and English beers, and six-row barley was traditionally used in American beers. Both varieties are in common usage in America now. Non-alcoholic drinks such as barley water and mugicha (popular in Korea and Japan) are also made from barley which has not been hulled. Barley is also used in soups and stews, particularly in Eastern Europe. A small amount is used in health foods and coffee substitutes.

Barley is more tolerant of soil salinity than wheat, which might explain the increase of barley cultivation on Mesopotamia from the 2nd millennium BC onwards. Barley is not as cold tolerant as the winter wheats (Triticum aestivum), fall rye (Secale cereale) or winter Triticale (X TricticaleWitt.), but may be sown as a winter crop in warmer areas of the world such as Australia.

Barley must have its fibrous outer hull removed before it can be eaten. Barley grains with their hulls still on are called covered barley or 'hulled barley". Once the grain has had the inedible hull removed, it is called dehulled barley. At this stage, the grain still has its bran and germ, which are nutritious. Dehulled barley is considered a whole grain, and is a popular health food. Pearl barley or pearled barley is hulled barley which has been processed further to remove the bran. It may be polished, a process known as "pearling". Dehulled or pearl barley may be processed into a variety of barley products, including flour, flakes similar to oatmeal, and grits.