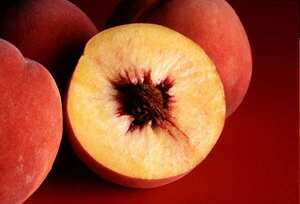 The peach is the fruit from a species of prunus with a sweet flesh and a fuzzy skin. Peaches with white flesh typically are very sweet with little acidity, while yellow-fleshed peaches typically have an acidic tang coupled with sweetness, though this also varies greatly. Both colours often have some red on their skin. Low-acid white-fleshed peaches are the most popular kinds in China, Japan, and neighbouring Asian countries, while Europeans and North Americans have historically favoured the acidic, yellow-fleshed kinds. 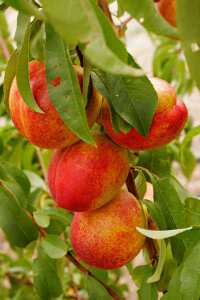 Nectarines on the tree

The nectarine is a cultivar group of peach that has a smooth, fuzz less skin. Though fuzzy peaches and nectarines are commercially regarded as different fruits, with nectarines often erroneously believed to be a crossbreed between peaches and plums, or a "peach with a plum skin", they belong to the same species as peaches.

How much does one cup of peaches / nectarines weigh?

Nectarines are at their best and in season during the following months: July, August & September.

Peaches are at their best and in season during the following months: July, August & September