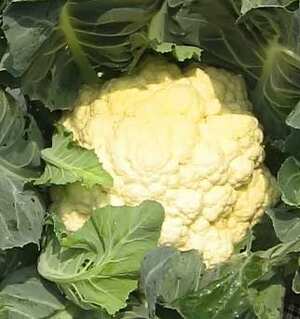 Cauliflower is one of several vegetables in the species Brassica oleracea, in the family Brassicaceae. It is an annual plant that reproduces by seed. Typically, only the head (the white curd) is eaten while the stalk and surrounding thick, green leaves are discarded. Cauliflower is very nutritious, and may be eaten cooked, raw or pickled.

Its name is a variation of cole flower or kale flower (cole and kale being variations of the same word), an acknowledgment of its unusual place among a family of food plants which normally produces only leafy greens for eating. The Brassica oleracea species is the same species as cabbage, Brussels sprouts, kale, broccoli and collard greens, though they are of different cultivar groups.

Wrap a whole cauliflower head in cling-film or a large sealed plastic container and microwave on full power for 8 minutes and it will be perfectly cooked. Chop into pieces and saute in olive oil flavoured with garlic to finish.

Cauliflower cheese is a popular British dish that uses cauliflowers.

Unusual way to cook a cauliflower

Add 2 or 3 whole star anise (flowers not petals) and 1 teaspoon of salt and boil as usual as in this recipe. It works very well!

How much does one cup of cauliflower florets weigh?

Cauliflowers are at their best and in season during the following months: December, January, February & March.