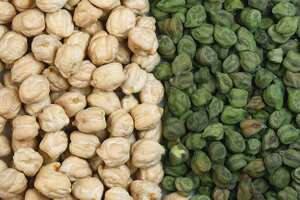 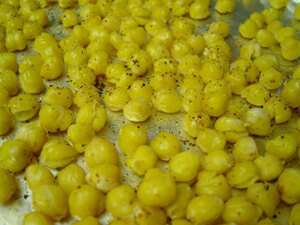 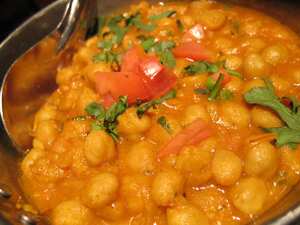 There are two main kinds of chickpea:

The Desi (meaning country or local in Hindi) is also known as Bengal gram or kala chana. Kabuli (meaning from Kabul in Hindi, since they were thought to have come from Afghanistan when first seen in India) is the kind widely grown throughout the Mediterranean. Desi is likely the earliest form since it closely resembles seeds found both on archaeological sites and the wild plant ancestor of domesticated chickpeas (cicer reticulatum) which only grows in southeast Turkey, where it is believed to have originated. Desi chickpeas have a markedly higher fibre content than Kabulis and hence a very low glycemic index which may make them suitable for people with blood sugar problems. The desi type is used to make Chana Dal, which is a split chickpea with the skin removed.

Chickpeas are grown in the Mediterranean, western Asia and the Indian subcontinent. Domestically they can be sprouted within a few days all year round with a sprouter on a windowsill.

Mature chickpeas can be cooked and eaten cold in salads, cooked in stews, ground into a flour called gram flour (also known as besan and used primarily in Indian cuisine), ground and shaped in balls and fried as falafel, fermented to make an alcoholic drink similar to sake, stirred into a batter and baked to make farinata, cooked and ground into a paste called hummus or roasted, spiced and eaten as a snack (such as leblebi). Chick peas and bengal grams are used to make curries and are one of the most popular vegetarian foods in India, Pakistan, Bangladesh and the UK. On the Indian subcontinent chickpeas are called kadale kaalu (Kannada), chana (Hindi and other Indic languages),Chhola (Bengali), konda kadalai or pothu kadalai (Tamil), where they are a major source of protein in a mostly vegetarian culture.

Many popular Indian dishes are made with chickpea flour, such as mirchi bajji and mirapakaya bajji telugu. In India unripe chickpeas are often picked out of the pod and eaten as a raw snack and the leaves are eaten as a green vegetable in salads. Chickpea flour is also used to make "Burmese tofu" which was first known among the Shan people of Burma. The flour is also used as a batter to coat various vegetables and meats before frying, such as with panelle, a chickpea fritter from Sicily. In the Philippines garbanzo beans preserved in syrup are eaten as sweets and in desserts such as halo-halo.

175g of dried chickpeas rehydrates to 400g, the same weight as a tin of chickpeas.

Dried chick peas need a long cooking time (1-2 hours) but will not easily fall apart when cooked longer. If soaked for 12-24 hours before use, cooking time can be considerably shortened to about 30 mins. Don't add any salt during the boiling, it can make them (or any pulses) hard. Add salt after the cooking process.

Allow about 60 g of dried chick peas per person or half a 400g can of cooked chickpeas.

How to cook chickpeas in a pressure cooker