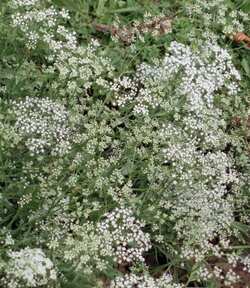 Not to be confused with star anise or fennel, which are from different species.

Anise or Aniseed, less commonly anís (Pimpinella anisum), is a flowering plant in the family Apiaceae, native to the eastern Mediterranean region and southwest Asia. It is an herbaceous annual plant growing to 3ft (1m) tall.

Containing liquorice-like components, anise is sweet and very aromatic. It is used to make the following confectioneries: Aniseed balls (Britain), Aniseed wheels (New Zealand), pizzelles (Italy), pfeffernusse (Germany), and knotts (Norway). Aniseed is also used to make the Mexican drink "atole de anís" or champurrado which is similar to hot chocolate, the Turkish drink Raki (alcoholic beverage),the Greek Ouzo, the Italian Sambuca, the spirit absinthe, the favourite for Arabic Arak, some root beer such as Virgil's Root Beer in the United States and as a digestive after meals in India. It also is used to make the dough, when preparing the famous Peruvian dessert "Picarones". In Colombia, it is also used to add to the national drink Aguardiente, in which, depending on the region, more or less anise gives the typical drink its distinctive flavour.