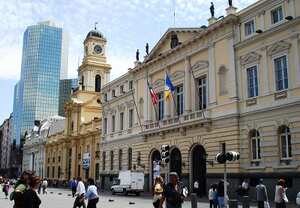 In this category you will find recipes from Chile in English. Chilean cuisine stems mainly from the combination of Spanish cuisine with traditional Chilean ingredients, with later influences from other European cuisines, particularly from Germany, Italy, Croatia, France and the Middle East. The food tradition and recipes in Chile stand out due to the varieties in flavours and colours. The country's long coastline and the Chilean peoples' relationship with the sea adds an immense array of ocean products to the variety of the food in Chile. The country's waters are home to unique species of fish and shellfish such as the Chilean sea bass, loco and picoroco. In addition, many Chilean recipes are enhanced and accompanied by wine, owing to the fact that Chile is one of the world's largest producers of wine. The country's immense geographical diversity allows for a wide range of crops and fruits to be present in Chilean food. One vegetable recipe is strongly recommended by Chilean Cookipedia visitor, Gabriela who states "You can't say you lived if you never tried Porotos Granados"! Due to the immense variety of products available in Chile's geographical makeup, recipes vary in different regions of the country. There are three distinct zones dealing with Chilean gastronomy.

All of the varying cuisines have received some contribution from the European and Chilean people living throughout the country. Each one implementing their own customs and foreign influence has played a prominent role in main dishes while also providing an ample range of desserts and drinks. The Pacific territory of Easter Island is considered part of Chile, and its own typical cuisine, a mix of Polynesian and southern Chilean flavours, consists mainly of fish and seafood, particularly lobster.

Throughout Chile and South America you may find fruits and vegetables that have been cultivated for ages. These agricultural products are appreciated and heavily implemented onto several recipes. They have also been exported around the world as important agricultural commodities. Among the most known are the following:

Although originating in Europe Azapa olives from Arica are considered a variety originating in the northern region and are widely recognised in Chile.

A fruit native to the subtropical regions of the Andes mountains, it is widely consumed and produced.

Recognised in Chile and Peru as choclo. Corn was a staple diet that prospered in three empires Mayas, Aztecs, and in closest proximity to Chile the Incas. It was also cultivated in varying systematic methods by the Atacameño. Through trade and travel, corn was brought and eventually embraced by the Mapuche and using it towards their culinary arts. It should be noted that Chilean choclo is a different variety of corn than is known elsewhere. It originated in Peru and is distinguishable by its very large kernels, which are tougher than American corn and its non-sweet somewhat nutty flavour.

A subtropical fruit of Andean origin, native to Peru it has grown well for centuries in southern Ecuador and Chile's northern coast. The fruit is very nutritious, having high levels of carotene and vitamin B3. The lúcuma is exported all around the world. It is an important flavour for gelatin desserts such as ice cream.

Ugni molinae is an endemic shrub native to southern Chile. The Mapuche Native American name is Uñi, and Spanish names include Murta and Murtilla ("little myrtle"); it is also sometimes known as "Chilean guava". It was used among the Mapuche before the arrival of the Spaniards. It is an ingredient used for marmalades and liquor.

Featured heavily in dishes such as cazuela, the potato native to the Americas, was widely grown in Chiloe Archipelago. The potato is a fundamental product in a wide array of dishes.

Quinoa is grown as a crop primarily for its edible seeds and originated in the Peruvian Andean region of South America, where it has been an important food for 6,000 years. Certain varieties of Quinoa are harvested in Concepcion, Chile, known as the Catentoa, and the Regalona is abundant in Temuco, Chile.

An elemental characteristic of Chilean cuisine is the variety and quality of fish and seafood, due to the geographic location and extensive coastline. The Humboldt current causes a supply of seafood that gathers along the Pacific coast perpendicular to Chilean waters. These include squid, soleidae (sole), albacore, cod, hake, corvina (salmon), batoidea and tuna. Seafood such as abalone, prawns, clams, crabs, shrimp, oysters, lobsters, percebes, picorocos, and eels are also fished in large amounts. Congridae or in Chile known as congrio can be deep fried in batter, or seasoned and baked. It may also be made into a stew: this popular dish, called Caldillo de congrio, was praised in an ode by Chilean poet Pablo Neruda.

You can't say you lived if you never tried Porotos Granados.

The following 24 pages are in this category, out of 24 total.