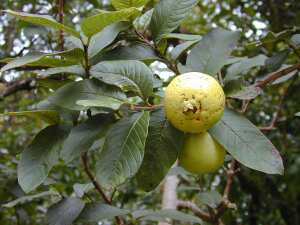 Guava is a genus of about 100 species of tropical shrubs and small trees in the myrtle family Myrtaceae. Native to Mexico and Central America, northern South America, parts of the Caribbean and some parts of North Africa, it is now cultivated throughout the tropics.

In several tropical regions, including Hawaii, some species (namely Cattley guava a.k.a. strawberry guava, P. littorale) have become invasive weed shrubs. On the other hand, several species have become very rare and at least one (Jamaican guava, P. dumetorum), is already extinct.

Guava fruit, usually 4 to 12 cm long, is round or oval depending on species. Its outer skin may be rough often with a bitter taste, or soft and sweet. Across species, skin can be any thickness, is usually green before maturity, but becomes yellow, maroon, or green when ripe. Guava pulp may be sweet and off-white or deep pink with midline seeds of variable number and hardness depending on species. Guava has a fragrance similar to lemon rind, but less sharp.

The fruit is also often prepared as a dessert. In Asia, fresh raw guava is often dipped in preserved prune powder or salt. Because of the skin's high level of pectin, boiled guava is also extensively used to make candies, preserves, jellies, jams, marmalades (goiabada), and also for juices and aguas frescas. In Asia, a tea is made from guava fruits and leaves. Guava juice is very popular in Mexico, Egypt and South Africa. Red guavas can be used as the base of salted products such as sauces, constituting a substitute for tomatoes, especially for those sensitive to the latter's acidity.

Guava wood is used for meat smoking and barbecues.