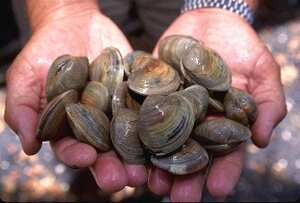 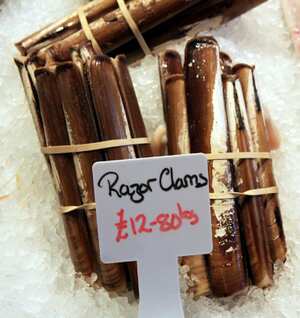 Clam is a word which can be used for all, some, or only a few species of bivalve mollusks; the word is a common name which has no real taxonomic significance in biology. In culinary use, the term "clam" can refer to the hard clam or quahog, mussels, scallops, razor clams etc.

Clams can be eaten raw, steamed, boiled, baked or fried; the method of preparation depends partly on the size and species. They can also be made into clam chowder (a popular soup in the U.S. and Canada) or they can be cooked using hot rocks and seaweed in a New England clam bake.

In Italy, clams are often an ingredient of mixed seafood dishes, or are eaten together with pasta.

The razor clam , Ensis directus, also known as the American jackknife clam. It is a large species of edible marine bivalve mollusc, found on the North American Atlantic coast, from Canada to South Carolina as well as in Europe. Note that "razor clam" sometimes refers to other species of clams.

This clam lives in sand and mud and is found in intertidal or subtidal zones in bays and estuaries. Because of its streamlined shell and strong foot, it can burrow in wet sand very quickly, and is also able to swim.

At low tide the position of the Atlantic jackknife clam is revealed by a keyhole-shaped opening in the sand; when the clam is disturbed, a small jet of water squirts from this opening as the clam starts to dig. This species' remarkable speed in digging can easily outstrip a human digger, making the clam difficult to catch. Thus the species is not often commercially fished, even though it is widely regarded as delicious.

The Atlantic jackknife clam is now also found in northwestern Europe, where it is regarded as a harmful exotic species. It was first recorded in Europe in 1978/79, in the Elbe estuary.

Clams are at their best and in season during the following months: September, October, November, December, January & February.