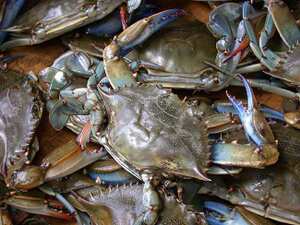 Horse crabs, also known as the gazami crab or Japanese blue crab, is the most widely fished species of crab in the world, with over 300,000 tonnes being caught annually, 98% of it off the coast of China.

Horse crabs are found from Hokkaido to South India, throughout the Malay Archipelago and as far south as Australia.

Flower crabs, also known as blue crabs, blue swimmer crabs, blue manna crabs or sand crabs, are a large crab found in the intertidal estuaries of the Indian and Pacific Oceans (Asian coasts) and the Middle-Eastern coast of the Mediterranean Sea. The name flower crab is used in east Asian countries while the latter names are used in Australia. The crabs are widely distributed in eastern Africa, Southeast Asia, Japan, Australia and New Zealand.

The species is commercially important throughout the Indo-Pacific where they may be sold as traditional hard shells, or as "soft shelled" crabs, which are considered a delicacy throughout Asia. The species is highly prized as the meat is almost as sweet as the blue crab.

Snow crabs, also known as spider crabs, queen crabs and other names, is a genus of crabs that live in the cold waters of the northern Pacific and Atlantic Oceans.

Snow crab are caught as far north as the Arctic Ocean, from Newfoundland to Greenland in the Atlantic Ocean, and across the Pacific Ocean, including the Sea of Japan, the Bering Sea, the Gulf of Alaska, Norton Sound, and even as far south as California.

Edible crabs, also known as Cromer crabs or chancre, is a species of crab found in the North Sea, North Atlantic and the Mediterranean Sea. It is a robust crab of a reddish-brown colour. The edible crab is abundant throughout the northeast Atlantic as far as Norway in the north and northern Africa in the south.

Edible crabs are heavily exploited commercially throughout their range. It is illegal to catch crabs of too small a size around the coast of Britain, a conservation measure brought in the 1870s. Crabs with a shell diameter of less than 100 mm should not be taken.

The Dungeness crab inhabits eelgrass beds and water bottoms from the Aleutian Islands in Alaska to Santa Cruz, California.

They are named after Dungeness, Washington. The annual Dungeness Crab and Seafood Festival is held in Port Angeles each October.

Mud crabs, also known (ambiguously) as mangrove crabs or black crabs, are an economically important crab species found in the estuaries and mangroves of Africa, Australia and Asia. In their most common form, the shell colour varies from a deep, mottled green to very dark brown. Generally cooked with their shells on, when they moult their shells, they can be served as a seafood delicacy, one of many types of soft shell crab. They are among the tastiest crab species and have a huge demand in South Asian countries where they are often bought alive in the markets. In the northern states of Australia and especially Queensland, mud crabs are relatively common and generally prized above other seafood within the general public.

How much does one cup of crab meat weigh?

Crabs are at their best and in season during the following months: April, May, June, July, August, September & October.