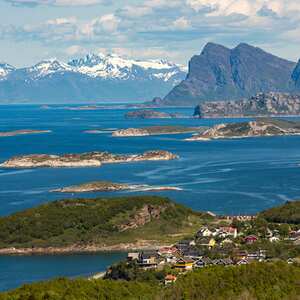 In this category you will find Norwegian recipes.

Norway is a very long and quite mountainous country thus transporting food items from coast to coast was a tall order until more recent times. Due to this, and due to the country’s economic past, most of what Norwegians tend to eat nowadays depends on where they live and what their lifestyle happens to be. More traditional Norwegian cuisine focuses on raw ingredients preserved and served in a traditional way, and prepared with traditional flavours.

Weekday breakfasts tend to be hurried and quick, with heavy emphasis placed on dairy and grains. Weekend breakfasts tend to centre around bread or rolls with pålegg (the stuff you put on top of bread-sliced cold cuts, cheese, various types of fish) or jam. Smoked salmon is paired with fluffy scrambled eggs. Gravlax, which is Swedish in origin, is also common. Peanut butter is rare, but becoming more popular. Muesli and cereal are also eaten and served with fermented milk or yogurt. Milk, various juices, coffee-very strong and dark- are common as well. Bacon and eggs are more common on Sundays or for special occasions.

The culturally iconic Norwegian matpakke (two open sandwiches) is still quite the norm for children and adults alike in modern day Norway. Some adults enjoy a warm canteen lunch during work hours if provided for by their company. In much of the country, eating lunch out in a restaurant is relatively uncommon during work hours but more popular on weekends in a café when meeting friends.

This is the biggest meal of the day and usually consists of boiled potatoes, another vegetable and meat, game or fish. Chicken dishes are not as common but are gaining in popularity. Dinner is nearly always served with saus-a brown or white gravy, especially if potatoes are on the menu. Dark or light lapskaus, a Norwegian potato stew or brennsnut, a stew made from leftover meats, swede, carrot, potato and broth are real treats-especially in winter. Fiskegrateng, poached salmon, meatballs with brown gravy, komle (also called klubb, kumle, and kompe), baked trout, leg of lamb, cold smoked mackerel and pan fried cod are all common meals. Frozen convenience foods are very popular in Norway and Norwegians buy more frozen pizza than any other country in Europe.

The sweet dishes served after dinners normally fall into two categories in Norway – desserts and cakes. Cakes are not exclusive to after dinner, but desserts normally are. At celebrations like weddings and bigger birthday, both desserts and cakes are normally served. Desserts are usually heavy in dairy. Ice cream is always a winner and a summer staple, with vanilla being the most popular flavour. Some great cakes to try are bløtkake (layers of sponge cake, raspberry jam and whipped cream), suksesskake (“success cake”) or verdensbeste (“The Best Cake in the World”).

Warm waffles served with brown cheese or sour cream and jam are a nice treat and common at family functions. Boller, Norway’s version of sweet buns, are cardamom scented chunks of gluten-filled heaven. They are sold in raisin, chocolate or plain varieties. Open sandwiches are also popular as snacks.

We have the following Norwegian cheese category.

If you thought that Norway was the capital of Sweden then this amusing and self-deprecating video may help to clarify the situation for you! 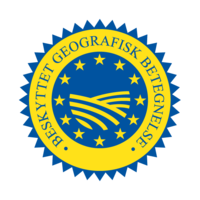 BGB stands for Beskyttet Geografisk Betegnelse which in the UK we know as Protected Geographical Indication (PGI). Under the EU agricultural product quality policy, this "covers agricultural products and foodstuffs closely linked to the geographical area. At least one of the stages of production, processing or preparation takes place in the area." The following Norwegian ingredients are those which are registered as BGB.

Clicking here to expand/collapse the complete table of BGB Ingredients