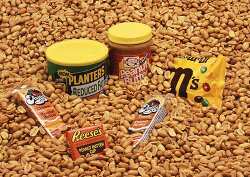 Peanuts are also known as earthnuts, goobers, goober peas, pindas, jack nuts, pinders, manila nuts and monkey nuts. (The last of these is often used to mean the entire pod)

The peanut is a member of the legume (pea) family.

Edible peanuts account for two thirds of the total peanut use in the United States. Popular confections include salted peanuts, peanut butter (sandwiches, candy bars, and cups), peanut brittle, and shelled nuts (plain/roasted). Salted peanuts are usually roasted in oil and packed in retail size, plastic bags or hermetically sealed cans. Dry roasted peanuts are also marketed in significant quantities. The primary use of peanut butter is in the home, but large quantities are also used in the commercial manufacture of sandwiches, candy, and bakery products. Boiled peanuts are a preparation of raw, unshelled green peanuts boiled in brine and typically eaten as a snack in the southern United States where most peanuts are grown. More recently, peanuts can be fried, where they can be eaten both shell and nut.

Peanuts are common ingredients in Peruvian Creole cuisine reflecting the marriage of native ingredients and ingredients introduced by Europeans. In one example peanuts are roasted along with hot peppers (both native to South America) and blended with roasted onions, garlic, and oil (all of European origin) to make a smooth sauce poured over boiled potatoes. This dish is especially famous in the city of Arequipa and is known as "papas con ocopa". Another example combines a similar mixture with sautéed seafood or boiled and shredded chicken in the form of a fricassee. These dishes are generally known as "Ajis" such as "Aji de Pollo" "Aji de Mariscos". One may find that not all cooks use peanuts in seafood "ajis". The combination of ground roasted peanuts suggests some Moorish and Middle Eastern influence in modern Peruvian cuisine, presumably through the Spanish conquistadores. It is well documented that Middle Eastern cuisine makes extensive use of ground and pastes of almonds, pine nuts and other nuts combined with rice, meats and vegetables to arrive to dishes like Rice Pilaf. In the Levantine and Catalan cuisine there is also a wide use of ground nuts. Although the peanut is not a nut it may be argued that the Spanish used the peanut along with local Peruvian ingredients to emulate their ancestral cuisine in the absence of almonds and pine nuts. Peanuts are also widely used in South-East Asian cuisine, particularly Indonesia, where it is typically made into a spicy sauce. Peanuts originally came to Indonesia from the Philippines, where the legume came from Mexico in times of Spanish colonization.

The peanut is one of many edible nuts.

How much does one cup of peanuts weigh?