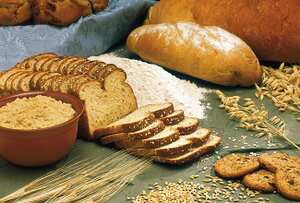 Various grains and by products 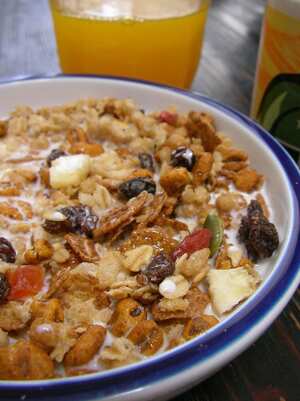 A mixture of breakfast cereals mixed with with fruit and nuts

Cereal crops or grains are mostly grasses cultivated for their edible brans or fruit seeds (i.e., botanically a type of fruit called a caryopsis). Cereal grains are grown in greater quantities and provide more energy worldwide than any other type of crop; they are therefore staple crops. They are also a rich source of carbohydrates. In some developing nations, grain in the form of rice, wheat, or maize constitutes practically the entire diet. In developed nations, cereal consumption is more moderate and varied but still substantial.

The word cereal derives from Ceres, the name of the pre-Roman goddess of harvest and agriculture. Grains are traditionally called corn in the United Kingdom and Ireland, though that word became specified for maize in the United States, Canada, New Zealand, and Australia.

Grains come from grasses that are members of the monocot family Poaceae.

What are Breakfast Cereals?

A breakfast cereal (or just cereal) is a food made from processed grains that is often eaten at breakfast as the first meal of the day. It is often eaten cold, usually mixed with milk. Some companies promote their products for the health benefits from eating oat-based and high-fiber cereals. Cereals may be fortified with vitamins. Some cereals are made with high sugar content.