5/5 This couldn't be easier, or nicer. Clever, clever. Jerry, aka Chef (talk) 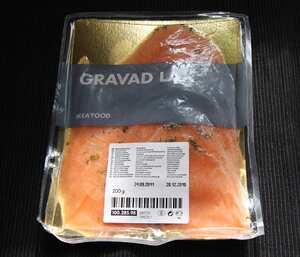 Gravlax or gravad lax (Swedish), gravad laks (Danish), gravlaks (Norwegian, Danish), graavilohi (Finnish), graflax (Icelandic) is a Scandinavian dish consisting of raw salmon cured in salt, sugar, and dill. Gravlax is usually served as an appetiser, sliced thinly and accompanied by hovmästarsås (also known as gravlaxsås), a dill and mustard sauce, either on bread of some kind, or with boiled potatoes.

When I first made this and tasted it, I didn't like the taste and thought it rather odd. Over the next few days I had the odd nibble and started to change my mind, by the end of 1 week I was waking up in the middle of the night, sneaking down to the fridge for another slice. Do try this, it's brilliant!

Slice very thinly at a 30° angle to the fillet Serve on toast, crackers, crispbread etc. A squeeze of lemon juice is the only extra that you are likely to need.

Ignoring the above, I used 1 (375 g) salmon steak, sliced in half lengthwise, see picture. A mean, 'supermarket-sized' bunch of dill is just enough for this steak and the two combined will be a great way to try this recipe out. Bart spices now do juniper berries in small spice bottles, so hunt them out in the spices section.

There seems to be varying opinions as top whether the steaks should be weighed down. I have to say that from my experience of curing bacon, weights enable more liquid to be drawn off without using excess salt, so I'm in that camp! I've used non-metallic objects to exert an even pressure when the lid is closed, Weighed down between two plates would work fine, but you will have a fishy fridge that way.

Having made it, I would now be inclined to carefully slice the skin off before processing so the flavour can properly penetrate both side of the fillet.

I combined my first gravlax with spaghetti, cream cheese and sour cream to make this amazing recipe.

Try your gravlax in a Smoked salmon pancake stack!