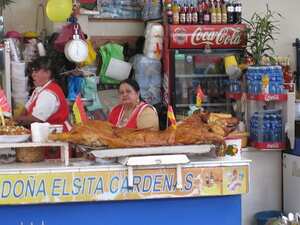 A market in Cuenca

In this category you will find Ecuadorian recipes in English. Ecuadorian cuisine is diverse, varying with altitude and associated agricultural conditions. Pork, chicken, beef, and cuy (guinea pig) are popular in the mountain regions and are served with a variety of carbohydrate-rich foods, especially rice, corn and potatoes. A popular street food in mountain regions is hornado, consisting of potatoes served with roasted pig. Some examples of Ecuadorian cuisine in general include patacones, unripe plantains fried in oil, mashed up and then refried, llapingachos, a pan seared potato ball, and seco de chivo, a type of stew made from goat. A wide variety of fresh fruit is available, particularly at lower altitudes, including granadilla, passion fruit, naranjilla, several types of bananas, uvilla, taxo, and tree tomato. There are several Ecuadorian dishes that are typical to the various regions in the country. For example, costeños (people from the coast) prefer fish, beans and plantains (unripened banana like fruit), while serranos from the mountain regions prefer meat, potatoes, rice and white hominy (mote). Regional examples include ceviches from the Coast, which are prepared in many different ways but basically consist of seafood (fish, shrimp, etc) marinated in lime juice, as well as cassava (yuca) bread, plantains served with crushed peanuts or salprieta, and encebollado, a very popular dish in the Coast, that contains a marinade with large chunks of fish, onions and various regional seasonings.

Seafood is very popular at the coast, where fish, prawns, shrimp and crabs, clams, etc are key parts of the diet. Plantain- and peanut-based dishes are the basis of many coastal meals, which are usually served in two courses. The first course is caldo soup, which may be aguado (a thin soup, usually with meat) or caldo de leche, a cream vegetable soup. The second course might include rice, meat or fish with a menestra (lentil stew), and salad or vegetables. Patacones (fried green plantains with cheese) are popular side dishes with coastal meals. Some of the typical dishes in the coastal region are: ceviche, pan de almidón, corviche, guatita, papas con quero, encebollado and empanadas; in the mountain region: hornado, fritada, humitas, tamales, llapingachos, lomo saltado, and churrasco.

A food of the mountainous parts of Ecuador is guinea pig.

The food is somewhat different in the southern mountain area, featuring typical Loja food such as repe, a soup prepared with green bananas; cecina, roasted pork; and miel con quesillo or "cuajada" as dessert. In the rainforest, a dietary staple is the yuca, elsewhere called cassava. The starchy root is peeled and boiled, fried, or used in a variety of other dishes. Many fruits are available in this region, including bananas, tree grapes, and peach palms. It's also used as a bread and has spread throughout the nation, most notably, to Quito where a company sells the native pan de yuca in a new sense; different types sold with frozen yoghurt.

Ecuadorian cuisine traditionally consists of two dishes, a soup and a rice platter. For the most part, Ecuador is known not only for its bananas and all the dishes made from them, but for its starch consumption of products like potato, bread, rice, and yuca. Traditionally any of these factors can be found in either the soup or the rice platter that may be served. Most regions in Ecuador follow the traditional 3 course meal of sopa (soup) and segundo (second dish) which includes rice and a protein such as meat, poultry, pork or fish. Then dessert and a coffee are customary. Dinner is usually lighter and sometimes just coffee or agua de remedio (herbal tea) with bread.

Aguardiente, a sugar cane-based spirit, is probably the most popular national alcohol. Canelazo is a popular drink made from aguardiente. Drinkable yogurt, available in many fruit flavours, is popular and is often consumed with pan de yuca, a light bread filled with cheese and eaten warm.

Besides the regions, there are several typical Ecuadorian dishes consumed on special occasions. During Finados (November 2), there is the Colada Morada, which is prepared with black corn flour. During Easter, the Fanesca is traditionally served all over Ecuador. Fanesca, a fish soup including several types of beans, is often eaten during Lent and Easter. During the week before the commemoration of the deceased or día de los muertos, the fruit beverage Colada Morada is typical, accompanied by Guaguas de Pan, which is stuffed bread shaped like children.

The following 16 pages are in this category, out of 16 total.