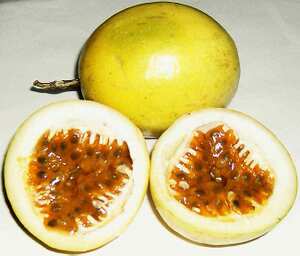 Passiflora edulis or passion fruit is a plant cultivated commercially in frost-free areas for its fruit. It is native to South America and widely grown in India, New Zealand, the Caribbean, Brazil, Ecuador, California, southern Florida, Hawaii, Australia, East Africa, Israel and South Africa. The passion fruit is round to oval, yellow or dark purple at maturity, with a soft to firm, juicy interior filled with numerous seeds. The fruit can be grown to eat or for its juice, which is often added to other fruit juices to enhance aroma.

The two types of passion fruit have greatly different exterior appearances. The bright yellow variety of passion fruit, which is also known as the Golden Passionfruit, can grow up to the size of a grapefruit, has a smooth, glossy, light and airy rind, and has been used as a rootstock for the purple passion fruit in Australia. The dark purple passion fruit (for example, in Kenya) is smaller than a lemon, with a dry, wrinkled rind at maturity.

The purple varieties of the fruit reportedly have traces of cyanogenic glycosides in the skin, and hence are mildly poisonous. However, the thick, hard skin is hardly edible, and if boiled (to make jam), the cyanide molecules are destroyed at high temperatures.

Growing in the UK

For many years now, I have successfully grown many varieties of passion fruit in our conservatory. However, although they have all produced spectacular flowers, none produced edible fruit.

Passion fruit is at its best and in season during the following months: November, December, January, February & March.