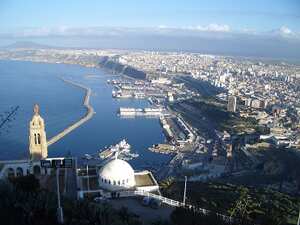 In this category you will find recipes from Algeria in English.

Algerian cuisine differs slightly from region to region. Its cuisine has strong Berber but also Ottoman Turkish influence due to the Ottoman occupation. The main varieties are Algiers, Oran (largely influenced by Morocco), Constantine (largely influenced by Tunisia), Kabylie and Sahara. Dairy products come mainly from Kabylie. The breakfasts, which have existed since the French colonisation, is generally light. Tea or Turkish coffee are served with some pastries. At noon, street stalls which sell often shawarma, are very common in the cities. The dinner, which is very copious, is often eaten late at night, especially during the month of Ramadan. Unlike most neighbouring countries except Tunisia, French colonisation explains that fork and knife are used and eating with the hands is considered impolite.

Algeria, like other Maghreb countries, produces a large range of Mediterranean fruits and vegetables and even some tropical ones. Lamb is by far the main meat consumed. Mediterranean seafood and fish are also eaten and produced by the little in-shore fishing. However, Algerians eat more meat than fish. Khabz, traditional Arabic flatbread, is the base of Algerian cuisine and eaten at all meals.

The main Algerian dish is merguez, a spicy lamb sausage, that originate from the Atlas mountains. Other common dishes include berber couscous, chakchouka, karantita, pastilla that is a speciality from Tlemcen, musakhan, maqluba, shawarma, Chekhechoukha and kanafeh. In all cases, spices are heavily used. There are also dishes of Spanish origin in Algeria, like the Gaspacho Oranais, an Algerian version of a Manchego dish.

Desserts are usually served at the end of a Algerian meal such as seasonal fruits. Pastries include makroudh, nougat and asida. Halwa are bisuits eaten during the month of Ramadan. Algerians are the second greatest consummers of honey per capita in the world.

Mint tea is generally drunk the morning and for ceremonies with pastries. Algerians are heavy coffee consumers and Turkish coffee is very popular. Fruit juice and soft drinks are very common and daily drunk. Algeria used to produce a large quantity of wine during French colonisation but production has reduced since independence.

The following 25 pages are in this category, out of 25 total.