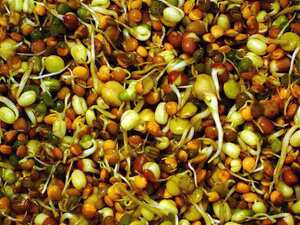 In Chinese cookery, when beansprouts are called for it is usually the sprouting mung bean that is being referred to.

However, many sprouts are in fact toxic when eaten, like kidney beans. Some sprouts can be cooked to remove the toxin, while others will be toxic either way and should be avoided. So before eating any sprouts, find out if that species is edible as a sprout.

With all seeds, care should be taken that they are intended for sprouting or human consumption rather than sowing. Seeds intended for sowing may be treated with chemical dressings. Several countries, such as New Zealand, also require that some varieties of edible seed be heat-treated, thus making them impossible to sprout.

Many varieties of nuts, such as almonds and peanuts, can also be started in their growth cycle by soaking and sprouting, although because the sprouts are generally still very tiny when eaten, they are usually called "soaks."

We have a few rather good beansprout salad recipes.

How much does one cup of bean sprouts weigh?