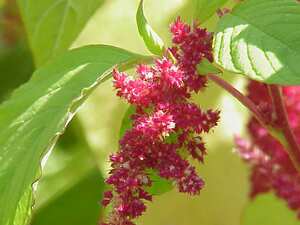 Amaranthus, collectively known as amaranth or pigweed, is a cosmopolitan genus of herbs. Approximately 60 species are presently recognised, with inflorescences and foliage ranging from purple and red to gold. Members of this genus share many characteristics and uses with members of the closely related genus Celosia.

Although several species are often considered weeds, people around the world value amaranths as leaf vegetables, cereals and ornamentals.

The word comes from the Greek amarantos; the "one that does not wither," or the never-fading (flower).

Several species are raised for amaranth grain in Asia and the Americas. Ancient amaranth grains still used to this day include the three species, Amaranthus caudatus, Amaranthus cruentus, and Amaranthus hypochondriacus. Although amaranth was (and still is) cultivated on a small scale in parts of Mexico, Guatemala, Peru, India, and Nepal, there is potential for further cultivation in the U.S and tropical countries and is often referred to as "the crop of the future." It has been proposed as an inexpensive native crop that could be cultivated by indigenous people in rural areas for several reasons: 1) easily harvested, 2) produces a lot of fruits (and thus seeds) which are used as grain, 3) highly tolerant of arid environments which are typical of most subtropical and some tropical regions, and 4) large amounts of protein and essential amino acids, such as lysine. Due to its weedy life history, amaranth grains grow very rapidly and their large seed heads can weigh up to 1 kilogram and contain a half-million seeds. Amaranthus species are reported to have a 30% higher protein value than other cereals, such as rice, wheat flour, oats and rye.

Amaranth grain is a crop of moderate importance in the Himalaya. It was one of the staple foodstuffs of the Incas, and it is known as kiwicha in the Andes today. It was also used by the ancient Aztecs, who called it huautli, and other Native America peoples in Mexico to prepare ritual drinks and foods. To this day, amaranth grains are toasted much like popcorn and mixed with honey or molasses to make a treat called alegría (literally "joy" in Spanish).

Amaranth was used in several Aztec ceremonies, where images of their gods (notably Huitzilopochtli) were made with amaranth mixed with honey. The images were cut to be eaten by the people. This looked like the Christian communion to the Roman Catholic priests, so the cultivation of the grain was forbidden for centuries.

Because of its importance as a symbol of indigenous culture, and because it is very palatable, easy to cook, and its protein particularly well suited to human nutritional needs, interest in grain amaranth (especially A. cruentus and A. hypochondriacus) was revived in the 1970s. It was recovered in Mexico from wild varieties and is now commercially cultivated. It is a popular snack sold in Mexico City and other parts of Mexico, sometimes mixed with chocolate or puffed rice, and its use has spread to Europe and other parts of North America. Amaranth and quinoa are called pseudograins because of their flavour and cooking similarities to grains. These are dicot plant seeds, and both contain exceptionally complete protein for plant sources. Besides protein, amaranth grain provides a good source of dietary fibre and dietary minerals such as iron, magnesium, phosphorus, copper, and especially manganese.

In Indonesia and Malaysia, leaf amaranth is called bayam, while the Tagalogs in the Philippines call the plant kulitis. In Andhra Pradesh, India, this leaf is added in preparation of a popular dal called thotakura pappu. In China, the leaves and stems are used as a stir-fry vegetable and called yin choi. In Vietnam, it is called rau dền and is used to make soup. There are two species popular as edible vegetable in Vietnam: dền đỏ- amaranthus tricolor and dền cơm or dền trắng- amaranthus viridis.

In East Africa, Amaranth leaf is known in Swahili as mchicha. It is sometimes recommended by some doctors for people having low red blood cell count. Also known among the Kalenjin as a drought crop (chepkerta). In West Africa such as in Nigeria, it is a common vegetable, and goes with all Nigerian carbohydrate dishes. It is known in Yoruba as efo tete or arowo jeja ("we have money left over for fish"). In Congo it is known as lenga lenga or biteku teku. In the Caribbean, the leaves are called callaloo and are sometimes used in a soup called pepperpot soup.

In Greece, Green Amaranth (Amaranthus viridis) is a popular dish and is called vleeta. It's boiled, then served with olive oil and lemon like a salad, usually alongside fried fish. Greeks stop harvesting the (usually wild-grown) plant when it starts to bloom at the end of August.