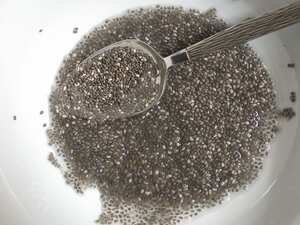 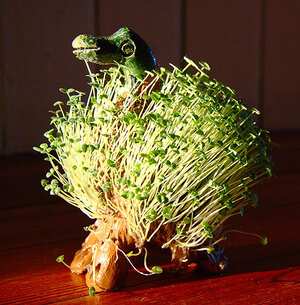 Chia (Salvia hispanica) is a plant of the genus Salvia in the Mint family. It originated in the central Valley of Mexico. It was largely cultivated by the Aztecs in pre-Columbian times as one of five major plant sources of food. After the arrival of the Spaniards, the plant became almost extinct because of cultural and religious reasons.

Chia is grown commercially for its seed, a food that is very rich in omega-3 fatty acids, since it is the vegetable source with the most omega-3 content, specifically α-linolenic acid (ALA). It also adds antioxidants and a variety of vitamins, minerals and fibre. For all these health related benefits, chia is in the process of application before the EU authorities to be considered as a novel food.

Chia seeds are typically small ovals with a diameter of about one millimeter. They are mottle-coloured with brown, gray, black and white. Chia seeds typically contain 20% protein, 34% oil, 25% dietary fibre (mostly soluble with high molecular weight), and significant levels of antioxidants (chlorogenic and caffeic acids, myricetin, quercetin, and kaempferol flavonols). The oil from chia seeds contains a very high concentration of omega-3 fatty acid — approximately 64%. Chia seeds contain no gluten and trace levels of sodium. There are no known toxic components of chia.

Chia seed is traditionally consumed in Mexico, the southwestern United States, and South America, but is not widely known in Europe. The United States Food and Drug Administration regards chia as a food with an established history of safe consumption.

Historically, chia seeds served as a staple food of the Nahuatl (Aztec) cultures of Central Mexico. Jesuit chroniclers referred to chia as the third most important crop to the Aztecs behind only corn and beans, and ahead of amaranth. Tribute and taxes to the Aztec priesthood and nobility were often paid in chia seed.

Today, chia is grown commercially in its native Mexico, and in Bolivia, Argentina, Ecuador and Guatemala. In 2008 Australia was the worlds largest producer of chia. A similar species, golden chia, is used in the same way but not widely grown commercially. Salvia hispanica seed is marketed most often under its common name "Chia," but also under several trademarks, including "Anutra," "Chia Sage," "Salba," and "Tresalbio."

Chia seed may be eaten raw as a dietary fibre and omega-3 supplement. Grinding chia seeds produces a meal called pinole, which can be made into porridge or cakes. Chia seeds soaked in water or fruit juice is also often consumed and is known in Mexico as chia fresca. The soaked seeds are gelatinous in texture and are used in gruels, porridges and puddings. Ground chia seed is used in baked goods including breads, cakes and biscuits.

Chia sprouts are used in a similar manner as alfalfa sprouts in salads, sandwiches and other dishes. Chia sprouts are sometimes grown on porous clay figurines which has led to the popular (U.S.) cultural icon of the Chia Pet.