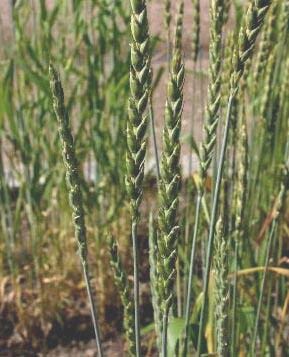 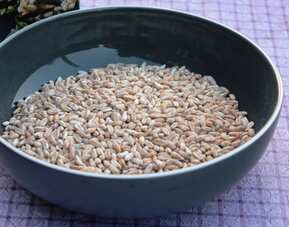 Spelt (Triticum spelta) is a variety of wheat. Spelt was an important staple in parts of Europe from the Bronze Age to medieval times; it now survives as a relict crop in Central Europe and has found a new market as a health food.

Spelt flour is becoming more easily available, being sold in British supermarkets since 2007. Spelt is also sold in the form of a coarse pale bread, similar in colour and in texture to light rye breads but with a slightly sweet and nutty flavour. Biscuits and crackers are also produced, but are more likely to be found in a speciality bakery or health food store than in a regular grocer's shop.

Like wheat, the raw grain when chewed releases trace amounts of gluten giving the mass a slight resilience, not unlike gum. The texture is slightly crunchy. The nutty flavour is more intense than it is in most breads and some prefer the raw substance to the baked goods.

Dutch jenever makers distill a special kind of gin made with spelt as a curiosity gin marketed for connoisseurs. Beer brewed from spelt is sometimes seen in Bavaria.

Spelt matzo is baked in Israel for Passover and is available in some American grocery stores.

Pearled spelt is now available in many supermarkets and makes an excellent substitute for rice, barley etc.